I’m very proud to announce the second release of my Magento Speed testing tool, MageSpeedTest.com – the best way to test the speed and performance of your Magento store. 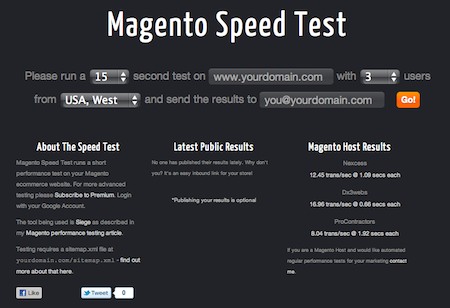 I have spent a bit of time on adding multiple test data centers and quite a look-and-feel overhaul too. The thing that has really perplexed me though is what YouTube video to embed when announcing the biggest change of all – premium subscriptions. I couldn’t decide between these two, so here they both are:


So…yes I have sold out, I’m going to try not giving away all the code I write for a change and make a few bucks on what I hope is the best way to test the speed of your Magento store.

Yes. Setting up 4 different load testing servers in 4 different cities around the world and hooking them up to Google App Engine costs Real Money™ so I am asking frequent users to pay $5/month to be premium subscribers. All the usual functionality that was free before, is still free – but the new extended functionality described below will cost to use. The good news is you can cancel your subscription any time, so if you only want to do some testing for a week or two while initially setting up your store, you don’t have to pay for more than a month.

Here’s my pitch of the new features,

You can check out the new speed testing features, and subscribe here. Because it’s built using Google App Engine, the account log-in is all via your Google Account, so you don’t even have to create yet-another-password to sign up.

Well, now that I have made the investment in servers around the world I have a few other ideas to extend this infrastructure. The most obvious is more, better Magento testing. To achieve that I am going to make a simple free Magento extension that lets MageSpeedTest better simulate real customer behavior (adding to cart, checking out etc).

I’m also going to extend my current Magento webstore monitor to use the 4 different servers so that it can do a better job of testing stores are alive.

So please go subscribe, try out the new features, and let me know what you think.