Today I released the new look for my Magento Speed Test site – it’s a tool for running Siege tests on your Magento stores. The old version looked pretty shit, in hindsight, so this should be a significant improvement. If you’ve met me you’ll know I don’t have a designer bone in my body, so you’d be justified in feeling dubious that I actually put a modern look on Magento Speed Test. The secret was my discovering (albeit months late) the Twitter Bootstrap css framework for web applications. It’s truly brilliant, and the documentation is very helpful – also it’s only one of many open source projects Twitter has made available. 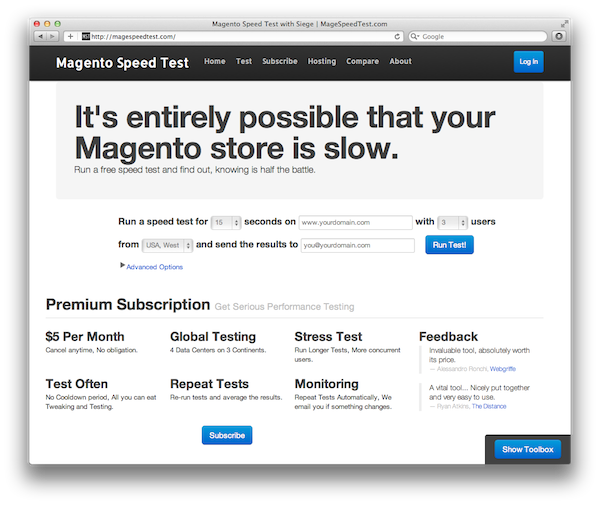 If you look at my new look site and compare it to the standard examples from Twitter you’ll notice I’m not as creative as it might outwardly appear. I do like the simple clean lines and consistent colors provided by default, so I’m sticking with them for now.

Some of the best things about the bootstrap framework from my point of view were:

And no real issues to complain about, it just works! Kudos to Twitter, will trade again.

If you haven’t already, go run a test, I bet the results will surprise you!

3 thoughts on “New Look for Magento Speed Test, Thanks to Twitter Bootstrap.”